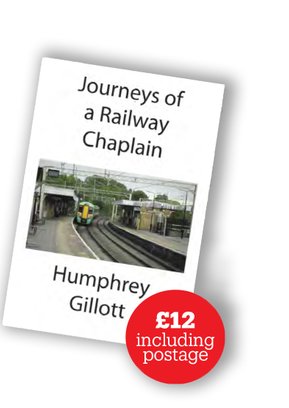 Any donation you are able to make would be greatly appreciated to help support our work.....THANK YOU

Journeys of a Railway Chaplain
by the former chaplain, Humphrey Gillott came about after an idea by Andrew Hall, Railway Mission AreaManager North, for the Railway Mission chaplains to write up accounts of the journeys they
would make during 2011.

Enthused by the idea, Humphrey set about it with gusto. At Humphrey’s brother’s suggestion, some of the accounts of his journeys during 2011 were published, and the above-titled book is the result.

As well as giving an insight into the work undertaken by the Railway Mission Chaplains, Humphrey includes anecdotes from his own personal life.