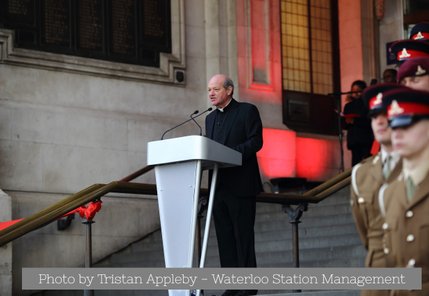 On 21 March 1922 Waterloo station was officially reopened by Queen Mary, following rebuilding to consolidate and expand on development since the station’s original opening in 1848.

The centenary of the reopening was marked with a ceremony on the steps of the Victory Arch, exactly 100 years later on 21 March, to remember those who made the ultimate sacrifice in the service of their country.

As well as being the station’s main entrance, the Victory Arch is one of the largest war memorials on the railway, dedicated to the 585 members of the London and South Western Railway who lost their lives in service during the Great War.

The ceremony was led by Railway Chaplain Christopher Henley from the Railway Mission, who was also joined by colleagues from Network Rail, South Western Railway, the Railway Heritage Trust and the British Transport Police, along with representatives serving in the Armed Forces and Armed Forces Veterans.

The service was opened by Cem Davis, station manager at Waterloo, who began by introducing everyone taking part in the ceremony,

This morning is both a celebration of the history and heritage of our station, but also an act of remembrance of all faiths and nationalities who fought and died during all conflicts especially those that paid the ultimate price during the Great War.